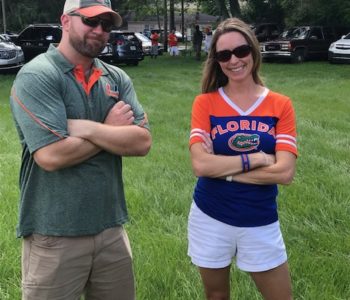 It was a firm-divided sort of weekend. Although we enjoy practicing law, Tim Snedaker and myself are huge football fans; especially when it comes to college football. Unfortunately, we are not only fans of different teams, but we are fans of teams in different conferences. Tim, an alumnus of University of Miami, only roots for the Miami Hurricanes. I am an alumnus of the University of Florida – Go Gators! This year’s football season enabled us with the unique opportunity of playing each other. Nothing like starting the football season off with our two teams not only playing each other, but also the opening college football game and the only game in college football playing on that day! This division extended into our families as well, including a division among the kids, the spouses, and in-laws. This division made for some interesting dinner conversations especially in the week leading up to the game.

The day finally arrived. It was game day. The start of college football! We all had decided we wanted to tailgate, and Tim so graciously decided to set up the tailgate with my husband (also a Canes fan…unfortunately). When us Gators arrived to the tailgate, a Canes tent was popped up, Canes chairs ready for seating and a Canes table prepped and ready for some pre-game Dominoes. We also were able to find the tailgate easily due to the obnoxious Canes flag blowing in the wind marking the territory. My husband, who purchased me a Gator flag, told me he was unable to locate the Gator flag prior to the tailgate, so that meant the only Gator markings at the tailgate were the ones on our own backs. Being the Gator I am, I decided to focus my attention to the game and away from the clearly marked Canes tailgate. I decided it was best to just focus on the Gator victory that was approaching. We were fortunate to have 12 tickets available to us – 6 for the Canes and 6 for the Gators. To say how to decide who sat where during the game was a challenge would be an understatement. Do we have all the Canes sit together? Do we do a mix? Do we keep the families together even if they are rooting for a different team? We eventually decided on a mix, which was a little uncomfortable during the game especially toward the end. And, we all know how the game turned out…a Gator victory, of course. The walk to the car was a long one and a quiet one. My daughter – also a Gator – stayed closed and we let the Canes replay the loss alone and silently cheered on our Gators!

The game is over, the weekend is behind us, and the firm divided has come to an end…well, at least until 2024 when the Gators face off against the Hurricanes again. Until then, Tim and I will continue to do what we do best, which is practicing law and representing our clients in any personal injury claim they may have. Go Gators!